In November we honor Native American Heritage Month. And at Geronimo Trail Guest Ranch, it’s all in the name. The namesake of our ranch is Geronimo, an Apache who was born and raised in the Gila National Forest. While his exact birthplace is unknown, it is said that he was born at the confluence of the East, West, and Middle Forks of the Gila River. That spot is less than 15 miles from our ranch (as the crow flies).

Geronimo was the leader of the last American Indian fighting force formally to capitulate to the United States. Because he fought against such daunting odds and held out the longest, he became the most famous Apache of all. To the pioneers and settlers of Arizona and New Mexico, he was a bloody-handed murderer, and this image endured until the second half of this century. To the Apaches, Geronimo embodied the very essence of the Apache values- aggressiveness and courage in the face of difficulty. These qualities inspired fear in the settlers of Arizona and New Mexico. The Chiricahuas were mostly migratory following the seasons, hunting and farming. When food was scarce, it was the custom to raid neighboring tribes. Raids and vengeance were an honorable way of life among the tribes of this region.

Native American History in the Gila 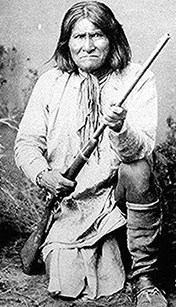 Geronimo was active in the Gila less than 150 years ago. However, the Native American history in the Gila goes back well over 1,000 years. Hunting and grinding artifacts, pottery, and beads dating back 10,000 years have been found near the ranch. The region was home to the Mimbres, an advanced pre-historic Indian culture. Highly artistic, they were known for their exquisite black-on-white pottery featuring nature motifs. The Mimbres made their homes farming and hunting along the Gila River, living in pit houses, shallow caves, and small cliff dwellings.

The Mimbres people are an enigma to archeologists because they can only speculate about their beginnings and especially about their ultimate fate. Archeologists believe the Mimbres culture evolved from the Mogollon culture, which itself possibly evolved from the Anasazi and/or the Hohokam cultures. During the Mimbres phase, the move was made from pit houses to semi-pit houses, and then to above-ground pueblos. At Geronimo Trail Guest Ranch, we are able to take you to these ancient sites and show you how their culture evolved. 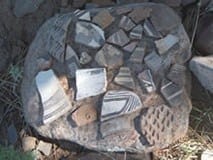 Mimbres pottery is the most famous artifact of the Mimbres culture. Pottery was made in plain and corrugated brown clay, polychrome, black and red, and the famous black and white. The expertise of the Mimbres potters is considered superior to that of any other Native American potters. To this day, we are still finding pottery sherds from this ancient culture while out horseback riding.

While horseback riding, we are also able to take you to several privately protected Mimbres pictographs, cliff dwellings, and pit houses dating from 200 to 1150 AD. 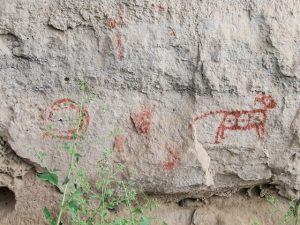 Native American Heritage Month honors the significant contributions the first Americans made to the establishment and growth of the U.S. At Geronimo Trail Guest Ranch, we are proud to share the history of the Gila National Forest with our guests. Not only are we able to share our knowledge with you, but we are also able to take you to historical sights and show you artifacts.

Are you interested in learning more about the Native American Heritage of the Gila National Forest? Contact us to learn more.