New Mexico has a rich history of outlaws, gunfighters and cowboys. Many of these characters rode over the same territory that you will enjoy at Geronimo Trail Guest Ranch. From gravesites and museums to hideouts and modern day festivals, below are a few highlights of local interest you may want to visit during your stay in New Mexico.

Where history suddenly comes to life and shows you that it is not just a list of dull dates. History is about people-who they were, how they lived, and in some cases, how they died. Come in and find out about the folks who lived and died and fought in the Old West. 1601 E Sumner Ave., Fort Sumner, NM – Call 800-556-7049. 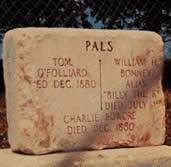 The museum is adjacent to the grave site of Billy the Kid and has Billy the Kid memorabilia along with other historical items from 1865. Located 7 miles southeast of Fort Sumner via U.S. 60 and Billy the Kid Road, off U.S. 60/84.
Fort Sumner, NM.

Hubbard Museum of the American West

Visit the Hubbard Museum of the American West Website.

Lincoln is a town frozen in time and once called “the most dangerous street in America.” Lincoln State Monument, a National Historic Landmark, preserves eleven historic adobe and stone buildings as they were during one of the most violent periods in New Mexico history. Walk in the footsteps of Sheriff Pat Garrett, Billy the Kid, and other infamous characters involved in the Lincoln County War, 1878-1881. 32 miles northeast of Ruidoso on U.S. 380. Lincoln, NM – Call 575-653-4025.

An annual event held in August, Billy the Kid rides again – and escapes (again!) from the courthouse as the citizens of Lincoln reenact this historical event. Great western adventure. For more information call 575-653-4025. 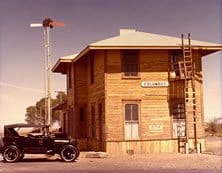 Learn the history of Columbus and Pancho Villa’s raid. See the American and Mexican Indian collection, military and weapons collection, and even a railroad room. On the corner of NM 9 and NM 11, Columbus, NM – Call 575-531-2620.

On March 9, 1916, the soldiers of General Francisco “Pancho” Villa attacked the small border town and military camp at Columbus, New Mexico. Pancho Villa State Park contains extensive historical exhibits which depict this raid, the first armed invasion of the continental United States since the War of 1812, and also the last one. Columbus, NM – Call 575-531-2711.

Silver City is the home of an historic replica of a cabin from the 1850s which was used in the film, The Missing. It replicates the cabin that Billy the Kid lived in with his mother, Catherine McCarty, who died in 1874, and is buried in Silver City’s Memory Lane Cemetery. See it at 201 North Hudson, at the Chamber of Commerce, in downtown Silver City, NM – Call 800-548-9378. 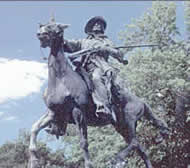 Christopher “Kit” Carson ran away from Missouri to end up in Taos and become one of the great frontiersman of our time. The Kit Carson Home and Museum contains a portion of Carson’s original home. Artifacts and exhibits illustrate the life story of Carson, his family and the character of frontier life in Taos. Other exhibits depict the importance of the Native American and Hispanic cultures in the history of northern New Mexico. Taos, NM. For more information call 575-758-4082.

Lea County has produced more rodeo champs than any other county in the U.S.! Visit this wonderful museum and discover rodeo stars, such as Roy Cooper, who got his start in New Mexico! Learn the history of Lea County as seen from the perspective of Indians, buffalo hunters, soldiers, open-range homesteaders, and settlers. Exhibits spotlight outstanding county ranchers and rodeo performers. 5317 Lovington Highway, Hobbs, NM – Call 575-492-2678.

From up near Folsom, at the northeast corner of New Mexico, “Black Jack” Ketchum is noted as the only outlaw in American history ever hanged for train robbery in 1901. See his grave at the Clayton Cemetery on Princeton Ave., Clayton, NM

Explore the rich history of outlaws, gunfighters and cowboys New Mexico has to offer when you stay at Geronimo Trail Guest Ranch!